The most important argument one can make for the inclusion of dance in the school curriculum is that learning dance makes a significant contribution to child development.  In doing so one must recall that child development is one of the two essential goals of education, the other being the acquisition of knowledge and skills.  This latter in fact, over recent years, has been allowed to occupy front and centre stage of the school programme as a result of the explosive increase in human knowledge, while the goal of development has unconsciously gotten pushed aside.  In allowing this to occur, the implied assumption has probably been that development comes as a natural collateral product of knowledge acquisition. The emphasis on language, mathematics, and the sciences, as well as on the skills such as those required to handle computer technology, are manifestations of this trend.  These studies contribute to the development of perceptional cognition and analysis, and the nurturing of logical-mathematical intelligence. The loss of consciousness of other developmental needs and the consequent neglect of some aspects of child development, is now being widely felt and there is increasing talk of “whole child education” (Armstrong 2006).

In order to define overall developmental goals it would be helpful to review our understanding of the human brain-behaviour system.

Our current understanding of the human brain-behaviour system permits us to regard it as an information processor (e.g. Pinker 1997), where the input information coming in via the sense organs gets processed, first to define what it is (perception/cognition), followed by an analysis of its significance. Then, a decision process follows to determine if a response is called for or not and, if yes, a suitable action is carried out that defines behaviour.

An element of the system that is pervasive in its influence on all of the above-mentioned processing functions is intelligence.  It is integral to their operation and determines their quality.  The theory of multiple intelligences (Gardner 1993) suggests that this intelligence function is in fact a set of parallel functions, each of which treats a sub-group of the information being processed.  In his original proposal Gardner listed seven types of intelligences – logical-mathematical, linguistic, musical, bodily-kinesthetic, spatial, inter-personal, and intra-personal, but later has added some more, suggesting that the list is open to additions if they conform to some criteria that he has proposed.

Recent studies have shown (LeDoux 1998) that there is, in fact, another parallel and independent path for processing the incoming information. This has been called the emotional brain, and the processing that occurs in this functional block results in a sensation in the body – a somatic response. Because this somatic response is the result of processing that is completely independent of any other processing, one can think of the body as an additional sense organ giving an output that must be taken as an input to the other functions mentioned above.

The system is operational at all times and is in a state of experience of the environment via the sense organs.  The human system is also capable of being in a state of experience without accessing external input.  This is possible because of our ability to imagine an input coming into the system, not only at the entry point for the perception function but indeed at any intermediate stage of information processing (consideration of the “what if ..” factor).  Such imagined inputs can lead to responses from the system similar to those from real inputs.

Summarizing the above, the human brain-behaviour system can be thought of as being made up of seven basic functions (PAIDEIA):

A simple representation of these basic functions that make up the human brain-behavior system is shown in Figure 1.  The imagination mode, which may be thought of as a secondary mode of the system, is shown in gray in the figure. 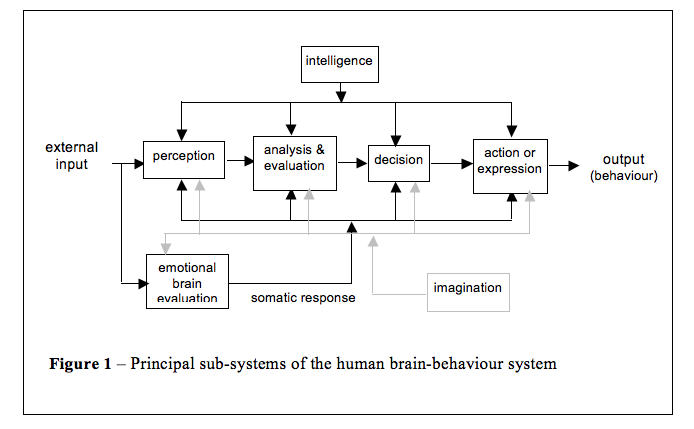 Based on the above, developmental goals can be defined as the fullest possible attainment of the potential capability of each of the processing functions of the child’s brain-behaviour system.

The attainment of developmental goals requires that each of the functions of the brain-behaviour system be exercised and trained to work to its fullest potential.  It must be recognized however, that development is a gradual and chronologically on-going process and therefore any training for exercising it must be designed to be age-appropriate. Planning for such training requires an understanding of the learning process and how the learnt experience gets registered in memory.

Learning is the process of placing every bit of information coming into the system, either from the external world or generated within as thoughts, into memory.  Elements of memory are stored in the brain as sets of interconnected neurons, including neural networks associated with the muscles (Sorri 1994).  Every experience, in fact every instant of any experience, results in the formation of such sets of neurons.  The sum of all such stored sets represents the knowledge base of the system. How long a set is retained depends on how often the experience is repeated, in one context or another, and also on the emotional impact it makes on the individual. According to neuroscience (Kandel 2006), each repetition strengthens the paths of the associated neural circuits, and the extent of the strengthening is linked to the impact that the experience has on the individual.

Retrieval or recall of a particular element of memory occurs when the corresponding set of neurons is turned-on or activated. The triggering of one of the neurons of the set can initiate the triggering of the others.  Sometimes this may only partially trigger the set and another neuron needs to be triggered to activate the whole set.  This other neuron must be from a different part of the network but linked to the set. When only part of the set is activated the recall is partial and other clues are required to get the whole activated. The likelihood of total recall is increased when the element is linked to a larger number of other elements.  Incoming information that has many dimensions leads to greater interconnections between sets of neurons, which, in turn, leads to building up of the knowledge base and also the ability for recall.  Thus, learning is more effective when more of the sense organs are involved in receiving the information, or when internally generated thoughts and ideas are interconnected with other thoughts.

It follows from the above that training exercises for the different processing functions, including all the intelligences, must be repeated a number of times, in one form or another, and the processing involve as many dimensions as possible of the concerned learning experience.  The learning experience also has to be verified so that only the correct results get retained.

When the information being processed is factual in nature, that is, when no emotional elements are involved, the system operates in the rational mode.  This is the mode that gets primary attention in the usual school programmes and consequently, much experience has been accumulated, relative to this mode, for providing adequate exercises for developing the various functions.  In particular, much emphasis has been placed on the functions perception and analysis and the associated development of linguistic and logic-mathematical intelligences. The decision function is also related to analysis but implies weighing the pros and cons of possible actions, which involves access to previous experience.  Another of the functions that could potentially benefit from the school programme is the function action, particularly when it pertains to expression. However, of late this has come to receive little attention, which results in inadequate attention to the development of imagination and communication.

Training for the action function must obviously involve training for the manipulation of the various limbs as well as gestures and other aspects of body language that could enhance expressional capabilities.

As mentioned earlier, the processing of emotional information gives rise to an emotional state that generates a somatic response.  This somatic response is not related to the rational interpretation of the input signals and is therefore, an independent and additional factor that feeds into the processing in the other functions. It is an important reaction that differentiates between pleasure and pain, and consequently between likes and dislikes. It thus influences decision-making and determines the level of motivation for any action, in addition to its role in perception and analysis.

Given the significance of the somatic response, training in the rational mode alone cannot be considered sufficient for full development and one needs to incorporate training for the emotional brain into the school programme.

The development of the emotional brain requires that the student be exposed and be made sensitive to the different emotions that one might experience in life, in order that proper responses can be understood.  However, the experience of different emotions, especially the negative or extreme ones, is ordinarily limited.  Even if it could be made possible, allowing such experiences is wrought with risk of causing psychological trauma, and therefore cannot be recommended as part of any school programme.  An alternative path to sensitizing a child to emotions is through the experience of pseudo emotions via the empathetic path in the emotional brain as shown in Figure 2. 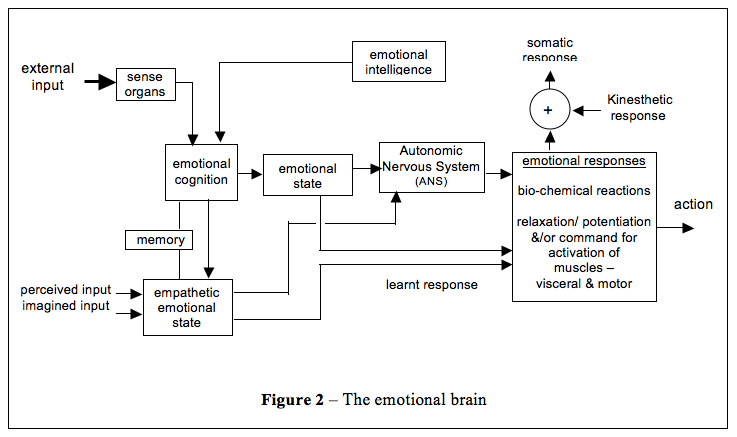 Information coming into the emotional brain can also generate what can be thought of as a pseudo emotional state, which is like an emotional state in some ways but somewhat tempered.  This is called the empathetic emotional state. Such states are experienced when one is being exposed to others experiencing true emotional states, either directly or through a narrative representation, or even through imagination. Being subjected to such experiences can therefore be used as part of the emotional learning process that could be very valuable in developing and nurturing emotional intelligence and the quality of the somatic response. The kinesthetic sense can also be exercised through empathy thereby enhancing the somatic response.  This, however, does require having previously had actual experience of the activity being sensed.

The acquisition of values and morals involves both the rational and the emotional paths of information processing. A well-developed emotional brain thus facilitates this process.

Training objectives can thus be summarized as follows:

Learning to dance can contribute to child development in many ways.

Learning to dance contributes to the physical development of the body.  To learn to dance is to learn to be sensitive to the various forces, stresses and strains experienced by the muscles as the body assumes different postures.  This can contribute to the development of bodily-kinesthetic intelligence.  It develops coordination of the action of the limbs and an enhanced sense of personal space and proprioception. It contributes to the oxygenation of the brain.

The story telling aspects of dance offers opportunities for the student to be exposed to and become sensitive to a variety of emotions through the empathetic path of the emotional brain thus making it an excellent training tool for contributing to one’s understanding of various human experiences, their causes and effects, and the forms of their expression.  One can, through dance, learn to express feelings and emotions through body movements, hand gestures and facial expressions.

The enhanced somatic responses can contribute to the integration of the rational and the emotional aspects of information processing, leading to enhanced cognition, evaluation and decision-making capabilities.

Dancing by its very nature contributes to the development of musical and spatial intelligences.

In conclusion one can say that dance is an excellent tool for child development and there is merit in including dance training in the school curriculum. It is, however, imperative that the dance curriculum be especially tailored for development needs, be age-appropriate and distinct from training for performance.