For the dancer in every child

Among the few efforts to create a corpus of items for children, Mamata-Niyogi Nakra's `Shishu Sadhana' is unique. 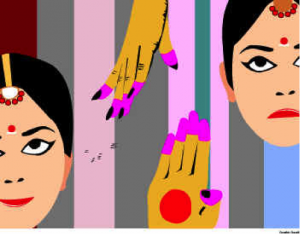 A GARDEN OF BLOOMS AND THORNS: Learning classical dance can either be a joy or a misery for contemporary urban child depending on how successfully the technique and repertoire are linked to their experience of life.

Classical dance makes no concessions for the child, because in the traditional context this was an area of and for expertise where amateurs had no place. Which is why our great gurus never thought in terms of a child-friendly repertoire in the classical dances. Every time one watches a youngster wrestle with complicated rhythmic sequences in a hit-or-miss gamble in a performance or sees a child struggle with adult emotions of the stereotypical Nayika, one experiences one of two things - a body and mind separation with the child totally isolated from what the dance is to show or a precocious imitation of adult mannerisms. Why have more teachers not thought in terms of fashioning a special repertoire more in empathy with the child's perceptions of the world?

The late guru Dandayudapani Pillai who saw the absurdity of a child executing a varnam with its full-blown sringar flavours, composed a simple varnam showing the mother/child relationship for the young dancer. But barring these odd attempts no sustained drive to create a corpus of items for children has been evident among teachers. There are exceptions of course. Pandit Birju Maharaj's little tihais and tukras woven round rasagullas or gulab-jamuns or round rhythms from daily life activity is a case in point. Another teacher deriving joy from teaching youngsters by linking the gestural vocabulary with ideas familiar to the child or having simple poems danced by the child is Leela Samson. Quietly working on items for children is teacher Jamuna Krishnan.

The classical dancer who has undertaken scientific research on "Shishu Sadhana" to fashion a whole margam for the child is Mamata-Niyogi Nakra, stationed in Canada's Montreal, her institution Kala Bharati doing notable work in Bharata Natya. It was French composer Saint Saens' music composition "Le Carnaval des Animaux" that first put the germ of the idea in Mamata to explore movement based on the gaits of animals in the Bharata Natya mode for children. Using a traditional tillana in Paras as base, Mamata's venture turned out to be a huge success enormously enjoyed by the children. Various workshops on how dance movement has been inspired by the movements of animals reinforced the feeling of being on the right path. Husband Harbans Nakra's research into child psychology established that there was indeed a need for dance as education in all institutions. The final thrust lay in Mamata's participation in the 1988 Conference in London of Child International (daCi) with the motto "Every child has a right to dance", and efforts to create a repertoire within the child's range of experience, of short items with varied entrances and exit, and with humour, and set to simple tala structures began in earnest.

Mamata picked on Carnatic vocalist O.S. Arun whose versatility and never failing readiness for exploring new areas made him ideal as the starting point in gathering a team for composing a corpus of child-friendly lyrics - all within the margam, with no compromise on Bharata Natya grammar.

A simple flower picking, and obeisance to God, guru and audience was the aaradhana, followed by an uncomplicated Hindolam jatiswaram where solo interventions of singing, violin, flute and mridangam gave the child a feel for tonal nuances in the same musical line when the melodic vehicle changes.

Shabdam was built round ball playing and imagining Krishna's dance on Kaliya's hood, based on a Telugu composition by V.A.K. Ranga Rao.

The child with her doll "Amar Putul" (The Doll Story) in Bengali, built in all the nine rasas into the interaction with the doll.

As for the varnam in Sanskrit "Mama mitram, mahanta shariram, nitya nidra-priyam katham bodhayami" by Karthik, the child looks for ways of waking up her friend, a benign giant, by tickling his feet with a peacock feather, by asking the bee to buzz round his nose, and by sprinkling water from the pot on his face.

Each of these actions becomes a jati!

The padam is a letter to Nataraja thanking him for creating the beautiful dance - "Meri Chitthi".

And the finale, a tillana with animal movements is in Behag.